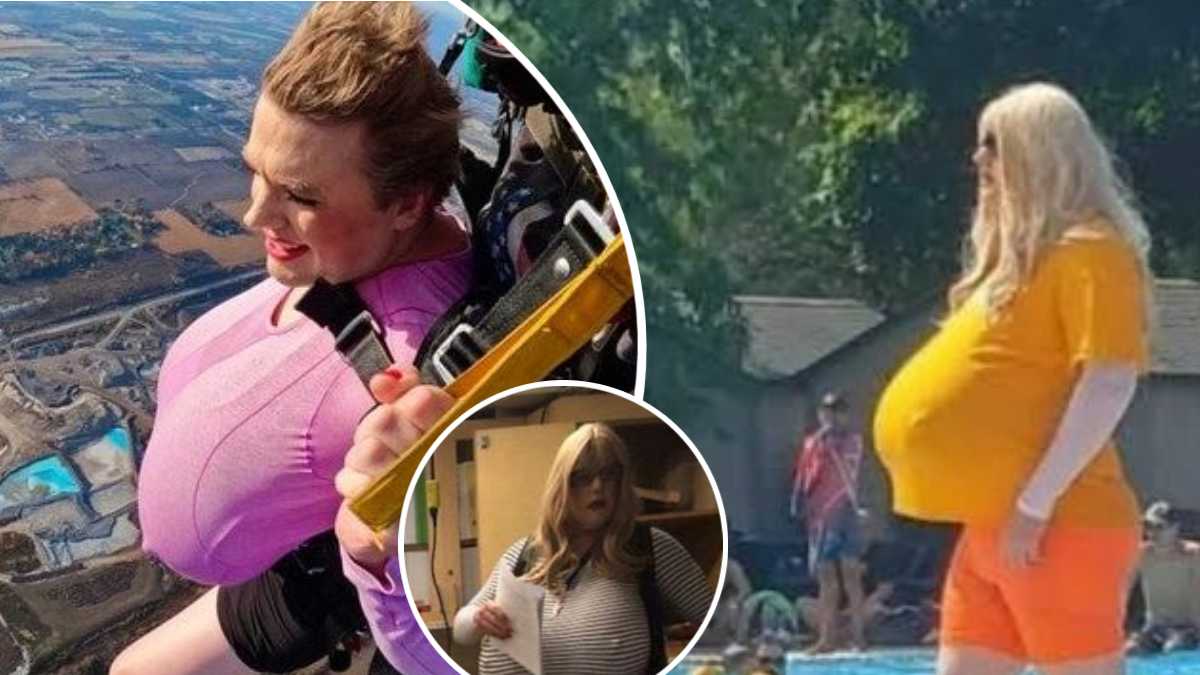 The trans Canadian high school teacher whose images with fake breasts and blond wig went viral was asked to leave a children’s performance. Kayla Lemieux attended a children’s dancing performance in 2021, a source informed a local news outlet Lemieux reportedly entered the theater at intermission. Parents eventually requested her to leave since she didn’t have a kid on the show.

David Menzies, a broadcaster for the right-wing Canadian news source Rebel Media, appeared on Tucker Carlson’s Fox News program on Friday. Menzies recounted the event in November. When Lemieux attended the dancing presentation, he exclaimed, ‘This is disgusting.’ It’s unsettling. Menzies mentioned in the same episode that he filmed Kayla’s apartment. He saw Kayla remove her breasts and wig at home.
In October, Menzies attended a Halton School District School Board meeting as ‘Mammary Menzies’ with huge prosthetic breasts.

Menzies submitted a petition to expel the school board over Lemieux’s job. Police took him from the meeting. Photos of Lemieux teaching students with Z-cup prosthetic breasts went viral earlier this year. Menzies questioned Tucker Carlson Friday why kids had a clothing code but not adults. Carlson said, “They don’t care about kids.”
During his demonstration, Menzies revealed that 16,000 people supported removing the board. He informed the board, ‘The Halton District School Board and Director of Education Curtis Ennis should be sacked for permitting a female-identifying shop instructor to wear prosthetic breasts barely controlled by see-through shirts.’

While the petition read: ‘The HDSB and the Director of Education, Curtis Ennis, have confirmed the school’s clothing code solely applies to children’. It continues: ‘Kayla’s fake boobs and blonde wig are a threat while using power tools. But Ennis and the board say they support teachers’ and kids’ gender expression.
Menzies believes Kayla has autogynephilia, a disease in which men are sexually aroused by the notion of themselves as women.
During the first protest, a parent can be heard yelling “Children!” We grownups should safeguard the kids. A parent said Lemieux offered other subjects than shop, another individual stated, “No sane person would dress like that to educate youngsters.” Are you okay?’

This week, students were threatened with punishment if they took photos of Kayla. The district has warned kids not to take images without permission. Students have posted footage of Kayla at other schools as she heals from a foot injury, showing her on crutches and sitting next to a vaping kid, the Toronto Sun says.

Students must follow the district’s “Responsible Use Procedures for Information and Communications Technology,” she noted. She informed the Sun that students must get permission from any subject (including other students, staff, or anybody) before recording, using, or sending photographs or video. This policy guides our standard civility.